Today we’re really excited to launch a set of new features for Fission, our open source Kubernetes-native serverless framework. These features are all designed to help you improve the quality and reliability of your serverless applications on Kubernetes.

Serverless architectures have obvious productivity advantages. You can get your apps up and running quickly, reducing the total lead time to ship your new application. However, to make this “production ready”, serverless architecture needs to be not just about moving fast, but also about moving fast safely, and at scale. That means we need features focused on code quality, testing, better deployment and release practices.

Live-reload: Test as you type

With Live-reload, Fission automatically deploys the code as it is written into a live Kubernetes test cluster, and allows developers to toggle between their development environment and the runtime of the function, to rapidly iterate through their coding and testing cycles.

This allows bugs to be found and fixed earlier in the application development lifecycle, when it is cheaper to do so – before they are discovered in the higher environments or cause any service disruption in Production. Further, it simplifies and increases the fidelity of integration tests, by running them earlier in the process using a live environment that’s consistent with the configuration and related services (i.e. database, API calls, etc.) that are used in Production. 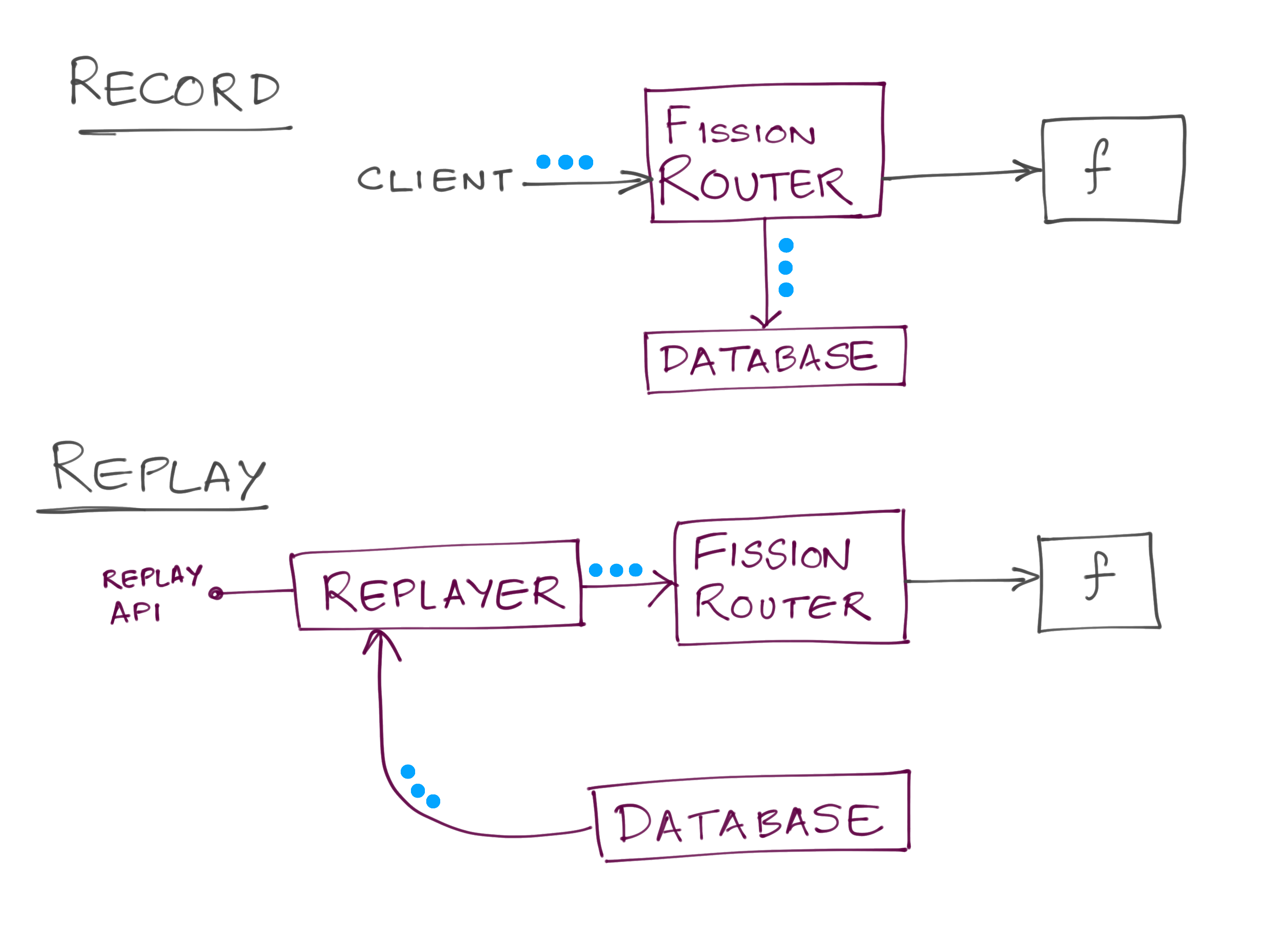 Check out this blog post to learn how to use live-reload in Fission.

Fission is the first serverless solution to offer Record-replay for functions. This feature allows you to record function invocations into a database, examine these recordings, and replay them on-demand for testing and troubleshooting.

You can configure which functions and workflows to record and for how long to retain the recorded events.

Record-replay is useful for developers to reproduce complex failures during testing or debugging. It can also make regression testing easier. In addition, operations teams can enable recording on a subset of live production traffic – this can help developers reproduce failures, and test application updates.

Canary deployments are a proven deployment strategy to minimize the risk in deploying new releases.

In this strategy, a new version is initially released only to a small fraction of users. If this version works well, it’s released to more and more users; if it doesn’t work, those users are shifted back to the stable version, and only that small set of users was affected by the unstable new version.

Fission is the first open source serverless framework to provide fully automated Canary Deployments. This means that Fission helps with not just the traffic-splitting portion of Canary Deployments, but also the feedback loop of checking for success and slowly rolling forward or rolling back.

Fission automatically increments traffic proportions to the newer version of a function as long as it succeeds, and rolls back to the old version if the new version fails. You can configure the initial percentage of traffic for the new version of the function, the the release rate at which to roll out the new version, and the error rate that will trigger a roll back.

Fission exposes Prometheus metrics for all your functions, so you don’t have to build Prometheus integration into any of your code. You get metrics simply by deploying functions into Fission.

Fission’s Prometheus integration gives you metrics for function invocation rate, function duration, and error rate. These metrics can also be used to set up alerts with Prometheus' AlertManager service.

Prometheus has a powerful query language that you can use to produce graphs. Additionally, Prometheus metrics can also feed Grafana to create dashboards.

Since Fission is open source and works on any Kubernetes cluster, it enables you to run on any infrastructure -– this means you can use cheaper VM instance types on public clouds (such as spot instances on AWS or preemptible instances on GCP).

And if you’re in a company with investments in datacenters, you can continue taking advantage of those datacenters. Fission scales resource usage up and down with demand, allowing you to maximize infrastructure utilization (in both public cloud and on-premises datacenter cases).

Fission functions can be configured with specific CPU and memory resource usage limits, minimum/maximum number of instances and auto-scaling parameters.

These parameters allow for functions to be tuned with an execution strategy that best fits the specific business use case – you can optimize for cost, for performance, or for something in between.

For example, functions that have severe cost constraints can be deployed into containers on-demand, minimizing costs at the expense of performance. Conversely, functions that need performance above all other requirements can be configured to have instances always running, ensuring low latency but driving up costs. Functions can also take advantage of Fission’s pre-warmed container pools, which aggregate the cost of pooling over a large number of functions, while providing performance benefits for all of them.

See the docs for more about controlling Function execution in Fission

Headquartered in San Francisco, CA., Snapfish is the leader in online photo printing services. Founded in 1999, it provides high-quality photo products to consumers looking for great value and selection. The company operates in multiple countries around the world and supports blue-chip companies’ photo efforts.

Using Fission, Snapfish is able to simplify their development experience, modernizing their applications to take advantage of Serverless while leveraging their existing datacenter investments.

“Our global photo platform helps hundreds of millions of devoted users preserve their memories by combining all of their favorite photos on thousands of customized products. We are always looking for ways to improve the way we manage the scale and quality of our applications. These new Fission features will help our developers deliver new customer experiences built on serverless applications without the dependency of managing the complexity of scale”, said Kenneth Lam, Director of Technology at Snapfish. “Fission allows our company to benefit from the speed, cost savings and scalability of a cloud-native development pattern on any environment we choose, whether it be the public cloud or on-prem.”

See a quick demo of all the new features in Fission

Learn more about Fission, or come chat with us on our Slack.

If you’re ready to try it out head over to the docs for instructions on how to install Fission.