Canary Deployments are a time-tested deployment strategy to reduce risk. The fundamental idea is that deploying software into a production cluster is different from releasing it to its users. With canary deployments, you deploy both old and new versions into a production environment, but send only a small percentage of traffic to the newer version. That way, if the new version fails, only a few users are affected rather than the application’s entire user base. If the newer version works well, the traffic proportion being sent to it is increased incrementally until the new version has been rolled out to all live traffic.

Users can configure the percentage of traffic that will receive the new version of the function, the error rate that will constitute as failure, and the release rate at which to roll out the new version.

Let’s go over a quick tutorial on using Automated Canary Deployments in Fission.

Automated Canaries are supported from Fission version 0.11. For the next section we’ll assume you’re already set up with this version; if not, checkout the install guide.

For this tutorial, we’ll start with two versions of a function deployed on a cluster, and show how automated canary deployments incrementally transfer load from one version to another.

Next, create the environment and functions on your Fission cluster:

Next, create a route with two weighted functions. This route is set up to send 100% of load to func-v1, and none to func-v2. Still, it’s important that it’s set up for two function versions.

Fission’s canary automation can roll out the newer version by changing these weights over time. Let’s create a canary configuration resource, which configures the parameters of how exactly the automated rollout will occur, and when it will rollback if necessary.

First, the configuration needs to know the old and new versions. Next, it needs to know which HTTP route to canary. The next two parameters, step and interval, specify how much the traffic shifts and how often; in other words it’s the rate of progress for the canary. Finally, the user specifies the maximum permissible percentage of failures; failures beyond this percentage cause a roll back.

The rest is automatic. In this example we’ve set the roll out rate to be pretty fast. In reality you’d probably want have it much slower, so you have more real-world testing on the new version before incrementing it to significant percentages.

An overview of how Automated Canary Deployments work

The user deploys two functions into Fission, and configures a trigger to split traffic between them. The Fission router uses this traffic split configuration to send an appropriate fraction of traffic to each version of the function. A common traffic split would be something like 90% to the old stable version and 10% to the new version.

Fission’s Prometheus integration means that the Fission Router reports error rate metrics for all functions. Prometheus scrames these metrics and stores them.

The CanaryController ties everything together. At each interval, it samples the error rate metrics from Prometheus, and makes a decision whether to roll forward or roll back. If it decides to roll forward, it modifies the traffic split fraction in the Trigger specification to increase the traffic to the new version, and the process repeats at the next interval. If at any point a failure threshold is reached, the controller immediately sets the new version’s traffic fraction to zero, and declares the canary status to have failed. 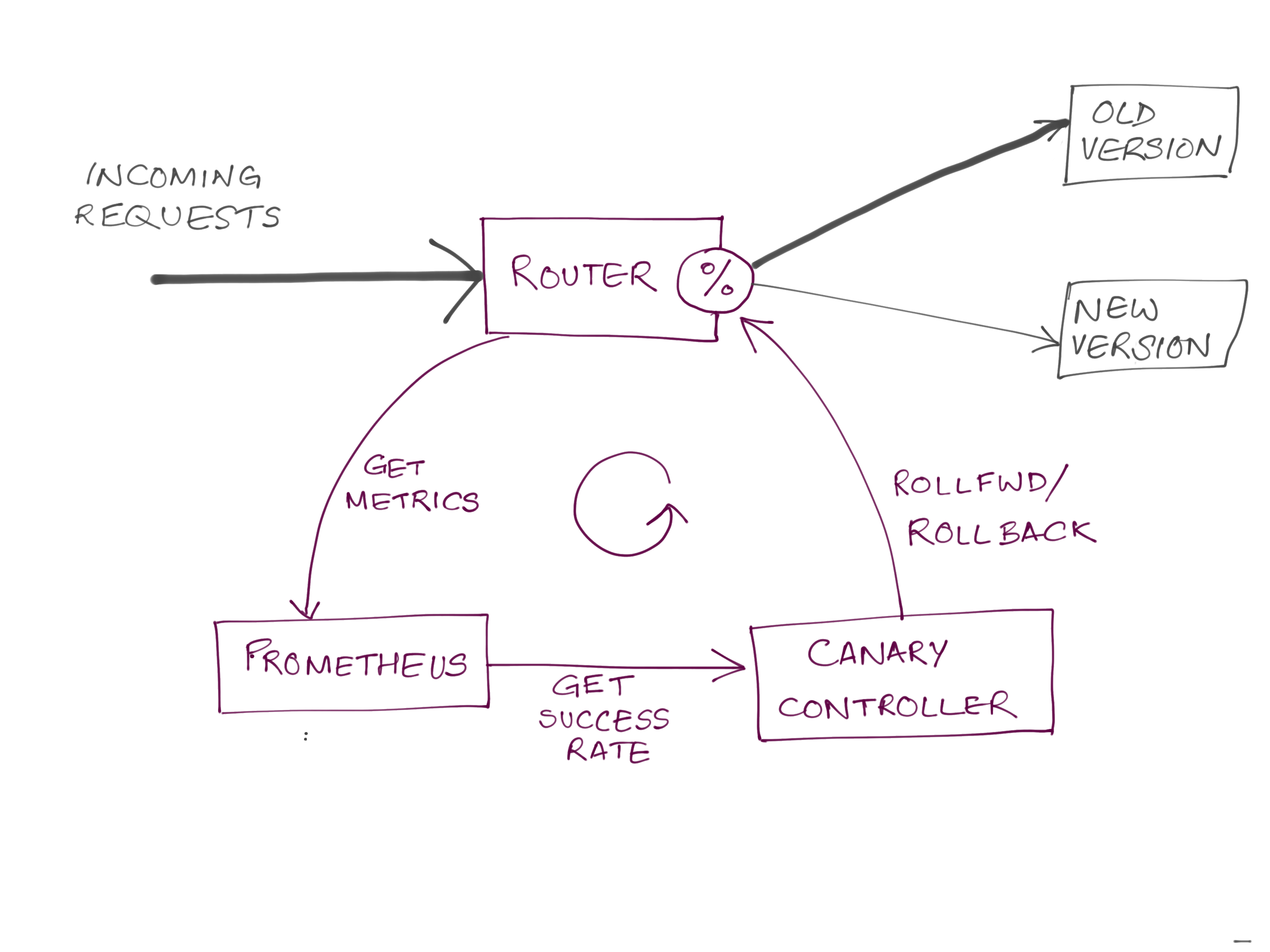 Automated Canary Deployments in Fission give you the ability to move changes into production with lower risk and increased confidence.

Check out the Fission installation guide to get started with Fission. Join us on the Fission Slack to chat, or follow us on Twitter at @fissionio.